Even though the weekend is almost here again, we want to tell you about last weekend.  Finally the days are staying consistently warmer and there has been sunshine and melting snow. A perfect time to get out and wander the wilderness.

Callie was pleased to wander to the end of the forested area and across the snow. 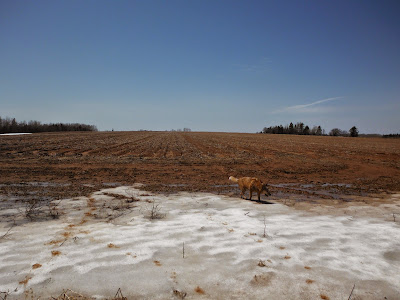 Then, of course she had to roll in the remaining snow. 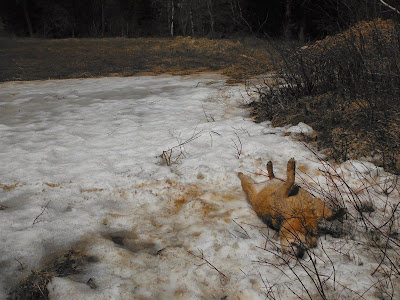 (not the most flattering picture of Callie)

After Callie's wander, it was time to take some others out.  Brook wasn't able to go because she wasn't feeling well. The previous day she pushed open a door, knocked over the pail of barn cat kibbles and ate and ate and ate before I got downstairs from the shower. She was extremely bloated and therefore was on crate rest.

Initially, the plan was to take only Bill and blind Hiker together but deaf Trail insisted that he come along and not wait for later, so off we went. 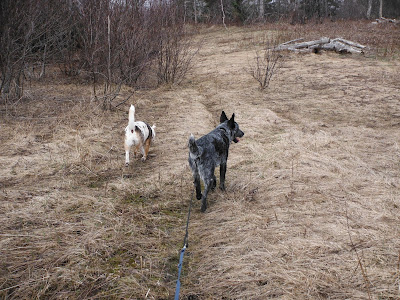 Trail is using three leashes attached together but Hiker, as usual is off leash. 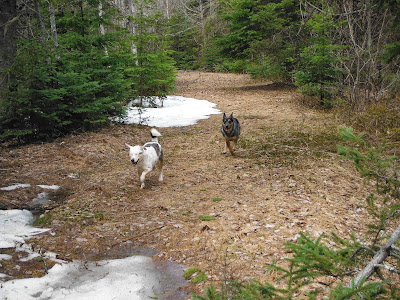 The landscape is so blah right now. It'll be nice to see some green and wildflowers soon.

A happy trio in the wilderness.  Once again it made think, as I often do, how lucky we are to have so many acres of land to wander.
Posted by acd6pack at 11:53