Before we get to telling you all about our roadtrip, I want to thank all of you for your kind words and happy thoughts you've left in the comments.  We appreciate you!

Since the dogs had to be relocated and boarding was not an option (too costly) I contacted the tenants who are enjoying life on the 40 acre farm I own located approximately 1800km/1200miles away.  I explained the situation and asked if they would mind having the dogs stay in the barn for a while.  Being animal lovers - they transported their horse, rescue sheep, goat, three dogs and a cat over 2600km, they get it and instantly agreed that I should bring the dogs.  So, a rental cargo van, five crates, a cooler, a tent and we were on our way!  (Okay, I will admit there was a box of kleenex too since I was almost constantly crying).

The plan was to drive for eleven or so hours and then camp for the night and continue the remainder of the way in the morning.  Ah...camping!  We love to camp.  Granted, the most dogs I have taken at one time was three.  With the whole pack, well, it was a bit chaotic.  They all had to be tied and of course, they all got tangled up. 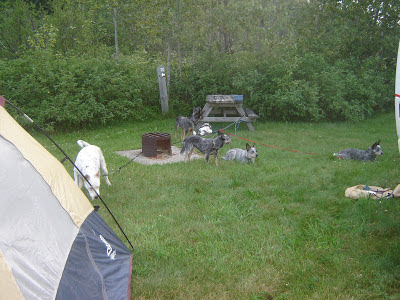 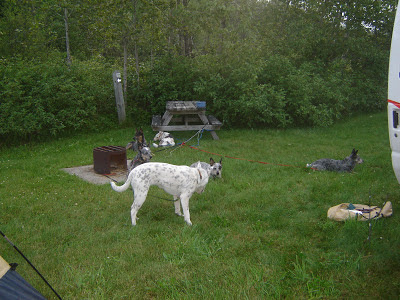 Once they were repeatedly untangled and I got the tent set up and they all had dinner, it was time to head into the tent for bedtime.  Now, doesn't that sound nice and peaceful.  Herd the pack into the tent and settle down for a nice, relaxing sleep.  HA HA HA HA!!

I led Bill to the tent and he was hesitant to go in, but did get inside.  I held the door closed as I called Forest over.  As soon as Forest started to enter, Bill ran out.  I called Bill back and stuffed him inside with Forest and called Breeze over.  No way was she going in.  Trying to convince a large stubborn blind dog to go into a tent where two dogs are that want out was not fun.  Then add in the blind one who would rather lay in the grass (Hiker) and the deaf one who kept looking away as I motioned her over (Azule) I was getting a bit frustrated.  While all this was going on, blind and partly deaf Brook realised once again that she was tied and went into panic mode, leaping and twisting at the end of the tie out.

In the morning, more chaos as I had to leash and tie everyone on the way out of the tent!  Well, we survived it and drove for the better part of the second day. 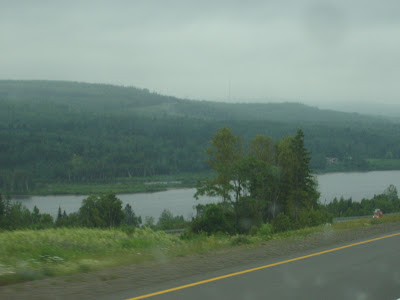 The weather was rainy and cool but the scenery was nice.  We saw quite a few of these signs - 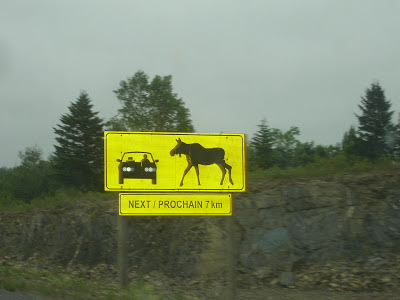 but no moose.  We did see an adult racoon and five little ones and a doe and fawn.

We arrived safe and sound at the farm late afternoon. 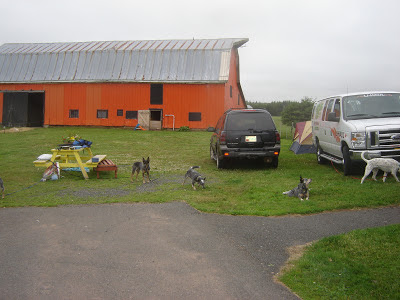 Things got off to a bit of a rocky start when the pack saw the chickens.  None of us were thinking as the dogs exited their crates and got out to stretch their legs.  Azule spotted the chickens almost instantly and was gone.  Feathers were flying, the rooster was squawking, people were yelling...not a good scene.  Not at all.  The rooster is missing a few tail feathers but is otherwise unharmed.  It is somewhat amusing now but just about tipped me over the edge at the time!
Posted by acd6pack at 13:18