Attacked by a robin

Yesterday, Breeze was outside in the yard, wandering around and enjoying the sunshine.  I could hear birds chirping and squawking as usual and thought nothing of it. I went to check on her (as I always do, just because I worry more than I really need to!) and saw that she had found something in the grass.  Oops! 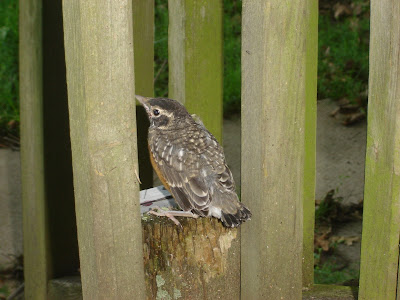 There are no photos of Breeze and the baby robin together since I was too concerned with saving the poor little thing.  When I walked outside, Breeze was literally pouncing in the area she knew it was.  It was funny watching her stand and tilt her head trying to determine exactly where it was.  Luckily, she missed and didn't actually land on it.    I took the above photo the next day.

So, later the next day, I was cutting the grass when the little baby robin fluttered out of the flower garden.  I immediately shut off the mower with the intent of moving the little thing.  Well, that's when Momma/Poppa (?) robin swooped in and actually brushed my back as I was leaning over.  Yikes! These robins are very protective of their babies.  I never expected to be attacked by a robin!

We seem to be having a "winged" theme this week.  Late on Wednesday night I had the couch to myself (a rare treat) and I saw something fly past with the cat Elsie in hot pursuit. My first thought was that it was a large moth but it seemed too big for a moth so I got up to investigate.  Nope, not a moth. 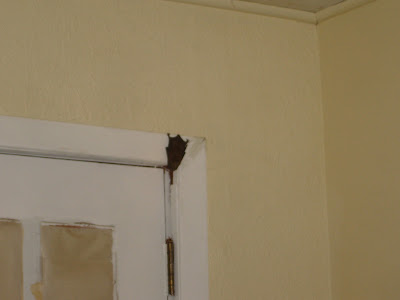 Yes, that is a bat.  In our livingroom.

It was carefully removed to the outdoors much to the disappointment of Elsie and Gerrard.