We had another snowstorm and I was able to get some pictures of (camera-shy) Callie.  She typically turns away when she sees the camera, unlike the others who tend to pose.

After a session of Jolly Ball, it was off to run the paths through the fenced area and chase a smaller ball.

That is one advantage of creating paths for the blind girls, they double as runways for playing fetch. 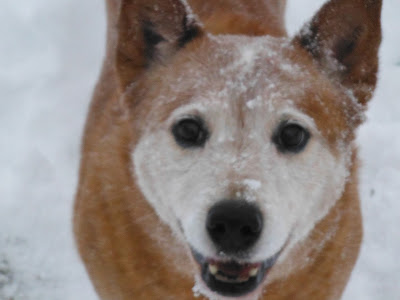 Callie may be getting older but she still enjoys playing in the snow!
Posted by acd6pack at 11:37