I've been admiring the cute little cookie cutters and molds that so many have for making treats.  Blueberry's human suggested Michael's as a source but there isn't one close to where we live and I forgot to go when we went to the big city.  But, yesterday while at the Bulk Barn...look what I found!  There was a huge selection of cookie cutters and I decided on the small bone and a cat. 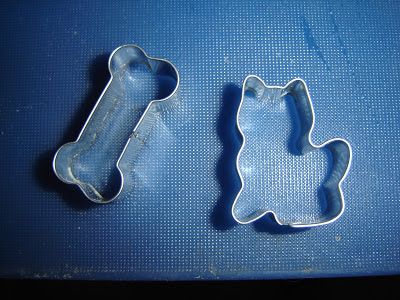 The best part is that they were less than a dollar each!  So, it was time to make some biscuits.  Did I have a recipe?  Nope, I never did get around to printing one.  Note to self, print dog biscuit recipes!

With no recipe, I just used some fresh baked squash, some brown rice flour and a pinch of garlic powder.  I rolled the dough out and used the cookie cutters.  They turned out very crispy but tasted bland (yes I tried one).  There were no complaints from the pack though, they all really like anything crispy, even bland and boring things.

To boost the flavour, I made little sandwich cookies using peanut butter as a filler. 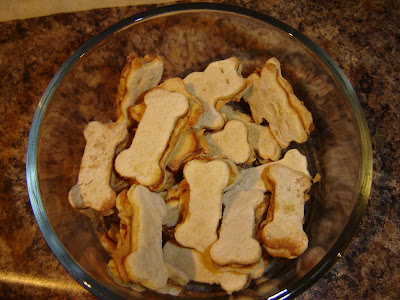 I roasted the squash seeds using a suggestion to first boil the seeds for 10 minutes and then drying them before roasting.  This made them less "woody" and with some seasoned salt, a yummy human treat. 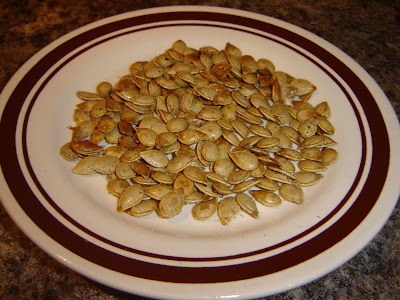 Since the oven was on and I was feeling ambitious I decided to make bread.  I've seen recipes for an orange cranberry bread that doesn't require kneading and is baked in a dutch oven.  Well, I don't have a dutch oven so decided to try and modify my basic bread recipe (which makes two loaves) by adding 1/4 to 1/2 cup each of dried cranberries and slivered almonds.  I also added the grated rind of two oranges and replaced the water called for in the recipe with orange juice.

The only problem I am having lately with making bread is the rising.  Our home thermostat is set at 62F/17C.  Bread needs a temperature of 75F/24C - 85F/29C to rise.  I've used, with limited success, a cooler rinsed with boiling water and covered with a couple of blankets.  Anyways, the bread didn't rise as much as it should have, but tasted very yummy!  It was good plain, toasted and toasted with peanut butter for breakfast. 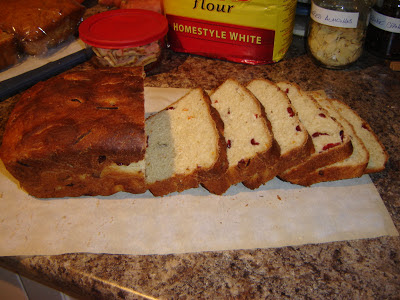 While the yeast bread was baking, I made an orange quick bread.  It's from the Company's Coming Muffins and More cookbook by Jean Pare.  Copyright 1983, Twelfth Edition 1989 by Company's Coming Publishing Limited.

In another bowl, combine dry ingredients and walnuts.

Bake in a greased loaf pan at 350F for one hour.  Check for doneness with a toothpick.

Glaze while hot from the oven with:
Juice from one orange and 1/4 cup sugar, heated to dissolve the sugar.

Let sit for 10-15 minutes before removing from the pan to a wire rack to cool.

Note:  I easily veganized this recipe by using ground flax seed and water for   the eggs and a vegetable marjarine.

I'm going to look for some dog biscuit recipes so that we can use our new cookie cutters again and make something more tasty!
Posted by acd6pack at 14:01