When we moved into our new home a few months ago, both of the blind girls, Brook and Hiker adjusted well.  They had very little difficulty with the stairs which were painted instead of carpeted as they had been used to. 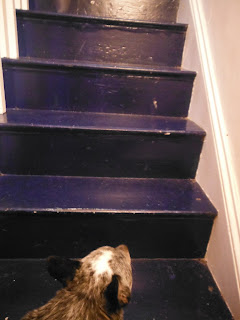 There was one incident with Hiker who slid down after losing her footing while turning around at the top but that was it until Brook developed a problem. Over the course of three days, little blind and mostly deaf Brook fell down the stairs seven times.  In fairness to Brook, the stairs are a bit steep and narrow. Now, you'd think that after the first or second time she would perhaps stay away from the stairs. Not our Brook.  She kept trying.  Luckily she never hurt herself.

Although it is not the most eye-pleasing, we now have sections of carpet runner stapled on the stairs for safety.  It works very well and no more falling. 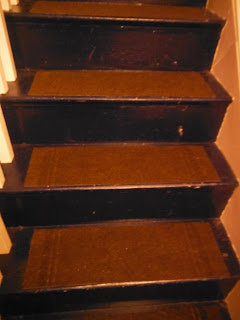