Hiker's neck/spine issues have been going on now for almost two months.  She had a referral visit to the Atlantic Veterinary College Teaching Hospital last week and without further testing, there really isn't much that they could diagnose. Most likely, there is a compressed disc in her neck although they cannot rule out the possibility of a lesion on her spine.

The suggestion was a CT scan and/or MRI then likely surgery.  The cost for the testing and surgery would be around $4000.  The idea of that type of surgery is scary to me and I would rather not put her through that. (besides to be honest, I don't know where the money would come from)

Right now, Hiker is doing very well on her medications.  She is back to playing, bothering Arthur the cat and the most obvious sign that she is feeling better, she is hoarding gathering things in her crate.

As an alternative to the surgery, next week we are going to see a veterinarian who does acupuncture.
Posted by acd6pack at 13:46 4 comments: 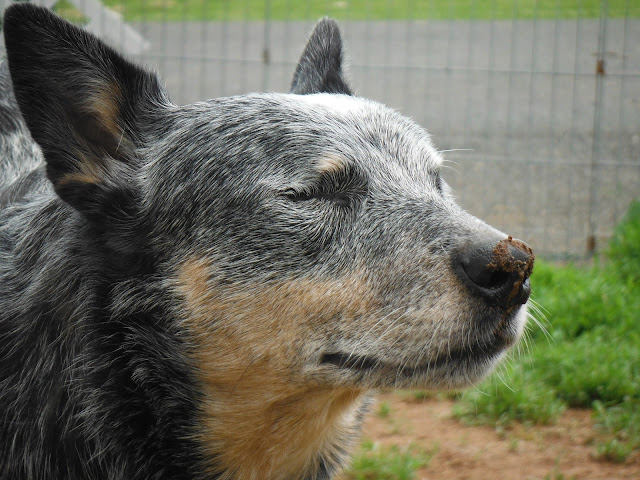 There it is again.

Hiding over there and watching the dogs. 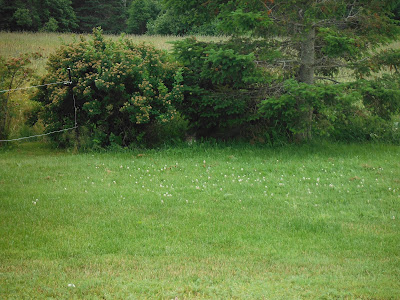 See it?  In the centre of the picture.

Here is a close-up. 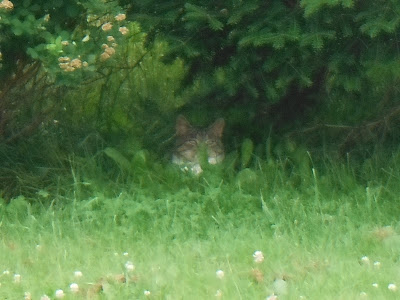 His name is Stripe. He appeared one bitterly cold January day and has been in the barn ever since. (He got neutered in the spring.) Stripe loves to torment the dogs by hanging around outside the dog's fenced area. When the dogs bark at him, he flicks his tail and ever so casually walks away.
Posted by acd6pack at 12:39 5 comments:

Callie's back leg hasn't been bothering for a few weeks now so she is occasionally playing ball and frisbee. Of course, only when it isn't too hot outside.  Yesterday she was having a great time chasing the ball around and then decided to get in the pool.  (as in previous years, she is the only one who actually gets in it)

After splashing around for a while, she decided to roll in the dirt and then come in the house.

This was her reaction when asked about the dirt and mud on the floor. 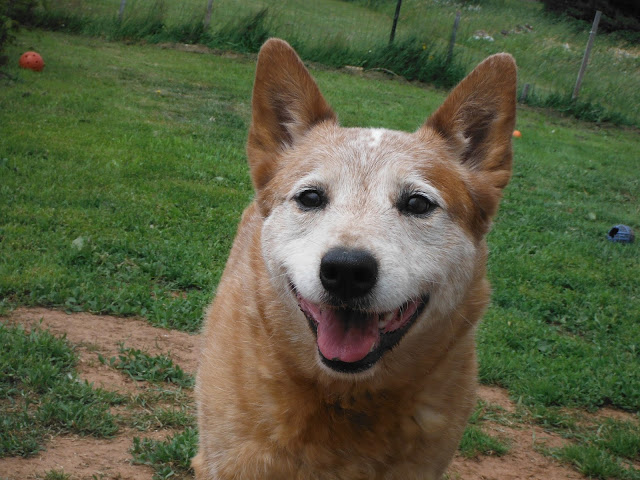 Now that summer has finally arrived here on the island, we are beginning to enjoy the first vegetables and fruits of the season.  The other day when I stopped the car at the end of the lane to get the mail, I smelled strawberries. The wind was gently blowing across the (uncut) field and the scent of wild strawberries was amazing.  I decided to pick some for us to eat and as I was doing that I noticed that there was quite a large area of plants and berries. Perhaps enough for a batch of jam. 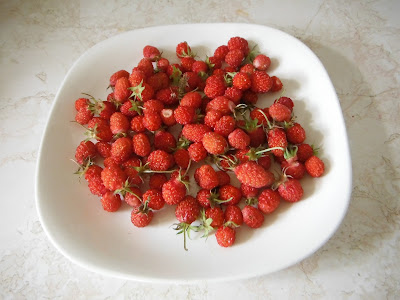 Yum!  The berries are on a side plate, not a platter. For a better idea of size, here are some on a teaspoon. Yes, a small spoon that you would use for your coffee or tea. 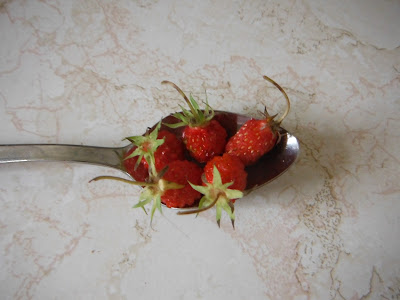 The above strawberries are actually some of the bigger ones I picked.

In case you are thinking that the pack is neglected and deprived, don't worry, they all had strawberries too! 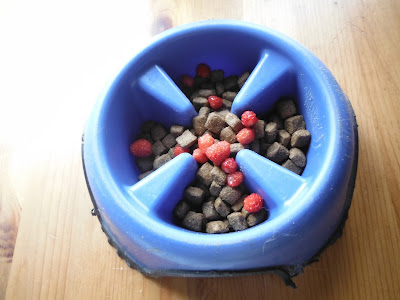 Once I had measured to be sure I had enough for a batch of strawberry rhubarb jam, the remaining were evenly distributed over their evening kibbles.

The jam is yummy and will be enjoyed over the coming winter. 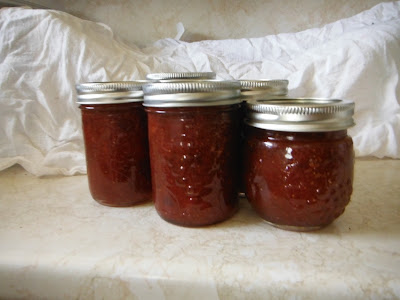 Our most recent post was a picture of how blind Brook likes to lay on the floor in front of the couch in the kitchen. (yes, we have a couch in our kitchen!) After posting that photo, I took this photo of our deaf boy Trail... 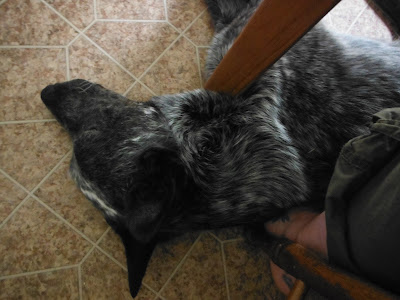 This is a very typical position for him to sleep. He wedges his head between the kitchen table leg and the leg of the chair.  Often times, it seems as though he must be compressing his neck but for him, it must be comfortable.

Interesting thing about this is that one of Bill's snuggling positions is to have an arm lightly around his neck. As in a loose "choke-hold".  That was discovered one day when I reached around him and he leaned into my arm. It is now something that he enjoys.  This from a dog is very resistant to having a collar put on or taken off.

Us humans...what do we know about comfort?! 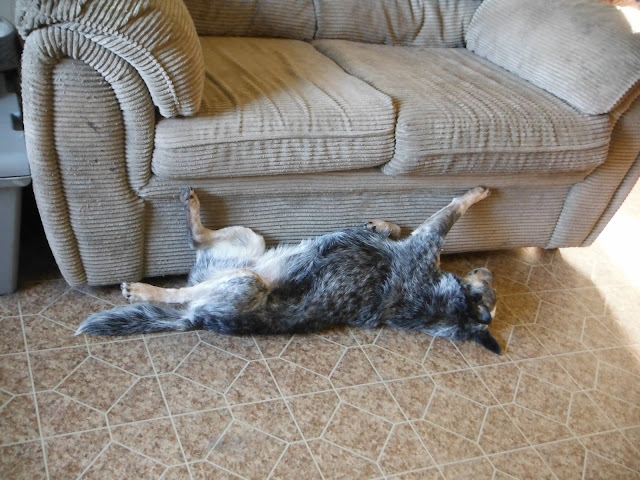 Our blind girl Hiker has been having some issues over the past few weeks with her neck.  It started with a slight hesitation before she would shake and then progressed to her not using her left front leg.  Initially our vet checked her and agreed there was some soreness there and suggested an anti-inflammatory/pain relief for a few days.  We did that with great results and after a week of no medication, Hiker suddenly wasn't using her left front leg and yelped repeatedly when bumped by one of the other dogs.  Off to the vet again. 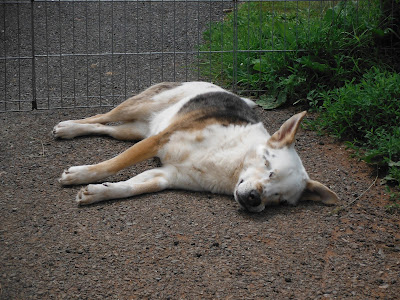 Hiker is now on four medications daily and we have an appointment at the Atlantic Veterinary College to see a surgeon. No firm diagnosis yet, we'll see what the surgeon has to say.  For now, with the medications, Hiker is doing well and acting more like herself.  It was a rough couple of days but she is now back to gathering shoes in her crate and bothering the cat. Both good signs that she is feeling better.

Our lovable lab Molly is still with us. The family that came to meet her decided to buy a puppy instead. Our veterinarian has been in touch with a couple who are currently in another country and returning soon who are interested in meeting Molly.  So, we'll see how that goes.  As always, we are in no rush for Molly to leave.
Posted by acd6pack at 08:25 3 comments:

Our fenced area has no shade except for at the far corner. That is too far away for the dogs to enjoy because of course they need to be close to their human who sits on the steps at the back door.  So, what to do?  Plant some trees. Sure, did that but they are going to take a few years to be big enough to offer shade. So, the best solution seemed to be a "fort".  We had one at our former home and it also doubled as a dirt digging place.  After scrounging around for some materials, the fort looks like this: 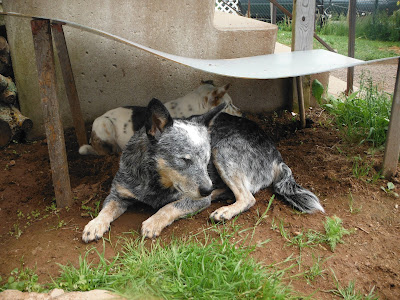 Okay, not the best fort. Have to start somewhere though!  As you can see, the blind girls like it and have been digging their spot in the dirt.  Since it isn't very big, I decided to reuse an old patio umbrella and created this: 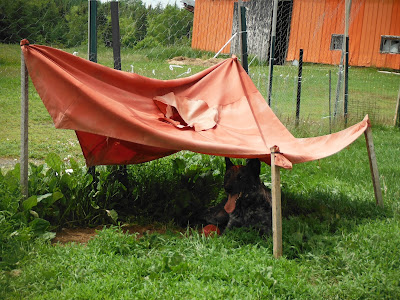 Again, it is a start and the most important thing is that the dogs have some shade - within close proximity of their human (who is sitting on the back steps eating ice cream on a stick and not sharing).
Posted by acd6pack at 01:30 3 comments: 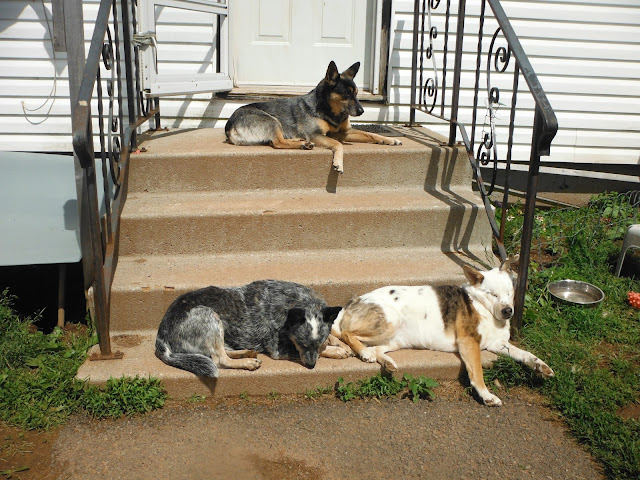