Our foster pup Twiggy has had some ups and downs the past couple of weeks and I have decided that being part of a big pack is not Twiggy's thing.

Twiggy seems to be periodically stressed, defensive and has been urinating and defecating in the house.  She was not doing that, she quickly got the concept of house training and did fine. Then not so much.  It seems as though she is marking space since she tends to do this immediately after having been outside. (Bill had similar behavior when first adopted and our vet, the rescue and dog people said he was likely marking space)

With Twiggy, I am also seeing her sometimes act defensive if another dog looks at her or walks close to her.  The fur on her back goes up and sometimes she growls. The others ignore her when she does this or will look at her as if they can't figure out what she is doing.  Twiggy will retreat to her crate on occasion and just observe but she's not relaxed about it. Not all dogs want to be part of a big pack, for some, one other dog or just a human is enough.  I think that is what Twiggy would prefer.

Having told you about Twiggy and the developing behaviors, I don't want you thinking that she is miserable all the time because she isn't! 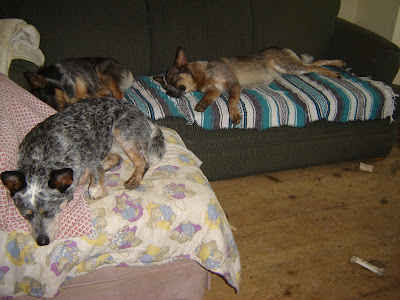 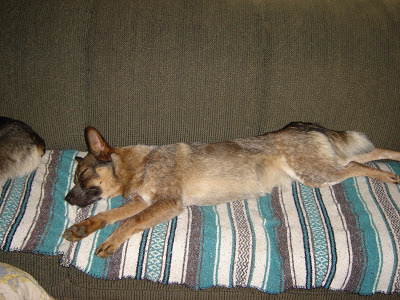 Since Twiggy isn't a special needs dog, she seems to be perfecting her sad and pathetic look in order to get more treats:

I am still seeing the fun loving, affectionate and smart side of Twiggy.  She loves to snuggle and is a very smart and sweet little thing who will be an awesome addition to someone's home. However, I have contacted the rescue she is from and requested that another foster home be arranged for her.

Interesting to note that since the puppy invasion, Twiggy seems more relaxed and is really enjoying the little ones, but I still think that the best thing is for her to be in another, less busy environment.
Posted by acd6pack at 01:30