Last week, I received a phone message that went something like this, "Hey,  remember last year when we talked about bringing back puppies from up north? I'm here now and think I can get some out.  Will that rescue still help get them adopted?"

It was JD, a police officer I know from work, who was on a two week assignment to a remote northern fly in First Nations Reserve. Being an animal person, JD (and other officers) had shared stories of the many stray dogs in the small community.  Being so remote, with no road access, extreme poverty and no veterinary care, there are many stray dogs that are left to continually breed and produce puppies.  I'll spare you the details but will say that the conditions and treatment of most of the dogs is horrible. (living conditions for the people aren't that great either)

JD and I had spoke about the possibility of arranging to fly a puppy or two out on the small police plane and then onto a commercial flight.  ANML-RESQ, the rescue I have fostered for many times, was enthusiastic in their offers of assistance. We tried last year to get some puppies flown out we weren't able to. Fast forward to last week and the phone message.

I sent an e-mail to ANML-RESQ asking if they would be interested in assisting with re-homing some puppies and the response was an excited YES!  So, after many e-mails to JD and the rescue, we were able to save three female pups!  Two others were flown out and adopted by other officers, for a total of five puppies saved from an uncertain and harsh future.

So, further to yesterday's teaser pictures, allow me to properly introduce....

After two flights, I picked them up at the airport for a car trip of over two hours and we arrived at our house around 1:30am.   The pack, of course, wanted to check these little fluffy things and it was fun to watch their reactions. Our girl Azule was excited and wanted to play while Bill was nervous and held up his "bad" leg as he retreated to the couch.  The others did a thorough sniff and the puppies just watched it all and no doubt wondered where they were.

The next day, I set up an x-pen in the kitchen to allow everyone to get used to each other.  It was a good idea.  It just didn't work very well.

Later, out in the yard, I decided to put crate divider panels over the other x-pen. Yet another great idea. 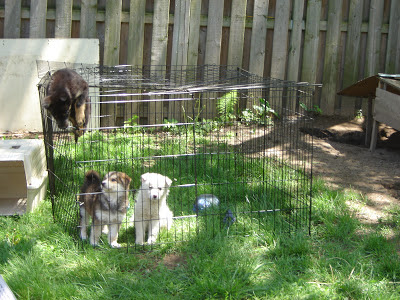 Okay, I give up.  I know the pack very well and really had no concerns about them with the puppies so I let them mingle.  Well, what a fun time!  The pack were very good with them and everyone had a great time playing.  It was a bit of a challenge to keep an eye on three little puppies but it was so much fun watching them interact with the big dogs.

I've been advised by ANML RESQ that Journey and Treasure will be going to their foster home on Saturday and Keeper will be going early next week.  So, for a few days, we have a house full and are having lots of fun hosting three adorable little puppies.

A huge thanks to our friend JD and to ANML RESQ for giving these puppies the life that all deserve.
Posted by acd6pack at 01:30