It was Friday and I shoulda cut the grass.  I coulda raked the leaves.  The kitchen renovations aren't done yet.  The bathroom still hasn't been painted.  But as I was dishing out the culinary delight of breakfast kibbles, I just knew what the pack was thinking.  Can you tell by the looks on their faces?


I am certain they were thinking, "Since you aren't going to work today...we should do something.  The laundry was done last night."

Well, being (sometimes) easily influenced, I checked the weather and with a forecast of sunny and highs of 11 C/ 51 F I decided that going in to the wilderness was a great idea.  No, not all of them at the same time!  Since we enjoy the chance to be off leash whenever possible, it's easier to take a few at a time.

Yes, there are risks associated with blind and deaf dogs off leash.  We know that.  The blind trio are very good with recall and tend to follow the path of least resistance which is the path.  When they are walking and running along, as soon as they brush taller grass on the sides of the trail, they change their course.

The areas where we walk/hike are away from roads and therefore safe for the dogs.  Be assured that they are very closely monitored and leashes are back on as we approach the parking area.

I decided to take the blind girls, Hiker, Brook and Breeze first. 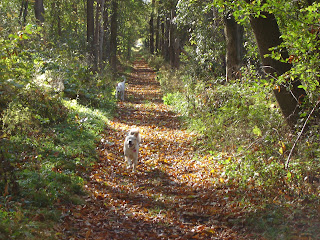 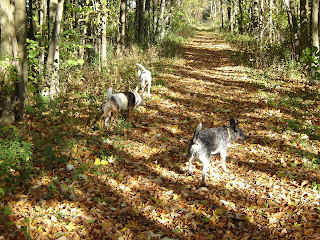 Even though Breeze is only five and a half months old, she does very well off leash on the trails.  All three blind girls tend to stick together and follow each other.  Brook is more concerned with where the humans are and Hiker, being very independant, is more likely to run ahead.

Hiker and Brook now have Doggles to wear to protect their eyes but I forgot them.  We're still getting used to them.  Hiker is more tolerant than Brook but she does seem to forget they are on where she's busy running around.  Next spring Breeze will get a pair when she is done growing.

Then back home to switch it up and take Azule, Forest and Bill. 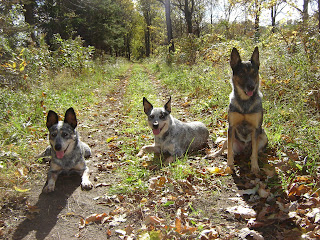 With Azule being deaf, she has two lunge-type leads that she uses.  I am more concerned about her off leash than the blind dogs.  Luckily, there has never been a time that Azule has taken off.  She is extremely good about checking in and doesn't go far.

Then, back home to get Callie.  She usually goes for walks by herself since she does have some issues and a short temper.  We had a great walk and then it was off to the beach! 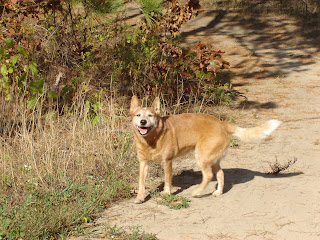 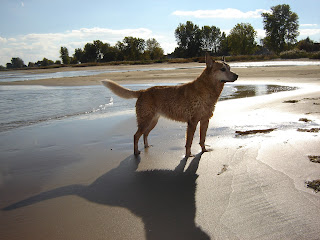 I'd like to say that Callie was just posing and loves to have her picture taken but that is not the case.  She hates having her picture taken and the only reason she is so posed in the second photo is that further down the beach a group of people and a few dogs arrived.  I'll take every photo opportunity I can get!

A great way to spend a Friday!