Saturday was a yucky fall day.  Cool and rainy.  What to do with a pack?  Hmmm...a good time to make Blueberry's pupcakes! Here's the recipe Blueberry posted. http://spottyspottypolkadotty.blogspot.ca/2012/10/apple-cinnamon-honey-pupcakes.html

We decided to make mini pupcakes, using the mini muffin pan.  Yes, the pack could and certainly would eat bigger pupcakes but if they're small, they can have two.  Maybe three.

As always, Brook was underfoot.  She really isn't as food obsessed as she seems.  Bill is more of a foodie, Brook just doesn't want to miss anything.  I think that being blind and partly deaf, she thinks that if she is underfoot there is less chance of missing something. 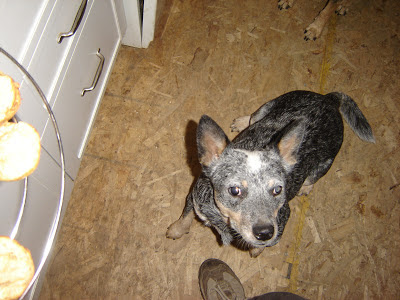 Since the oven was on, I decided to roast a squash (to make soup) and then got a bit creative and put some of the roasted and mashed squash on the pupcakes.  I came close to losing a finger while handing those out!

After a few pupcakes and some squash, time to relax.

After a nap, play time.

Once again, we tried to get Breeze to go up the stairs.  She is getting more confident and trying. 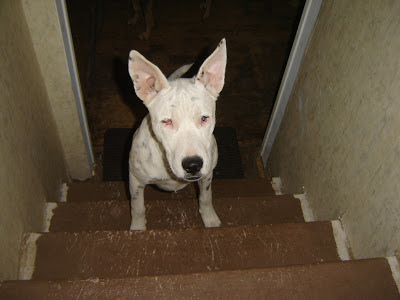 Brook and Azule were there for support.


Forest waited patiently at the top of the stairs.

No luck this time with the stairs, but we will try again.  Breeze is getting her back legs up on the second and sometimes the third stair, so she is figuring it out.  Perhaps she is enjoying the cuddle/carry time and doesn't want to learn the stairs!