How time flies.  It was a year ago today that Forest came home!  What a year it has been, a year in which he went from being a very scared, underweight and neglected puppy to a dog who loves attention and loves to play and explore.

It all started with a Petfinder listing I saw from a small rescue in Michigan that was looking for an Australian Cattle Dog experienced home for a young ACD who had been very neglected.  This puppy was from a farm where he had been adopted at eight weeks old. The adopters made a pen of chicken wire and tree branches in the corner of a horse pasture and there he stayed.  His only socialization was being fed once a day.  He had no name and had never been to the vet.  The people that had adopted him didn't want him because after a couple of months, they said he wasn't very friendly. By that time he was also bloated, underweight, full of worms and scared of everything.

After a few days at our home and almost constant observation on his part, Forest realized that the human-dog interaction was an okay thing.  In fact, it seemed like a really great thing! He gradually stopped cowering, shaking and peeing when someone looked at him and after about a week, he could be touched without acting terrified. It didn't take long for him to crave attention and touch.  Now, he's a lap dog who loves being petted and fussed. 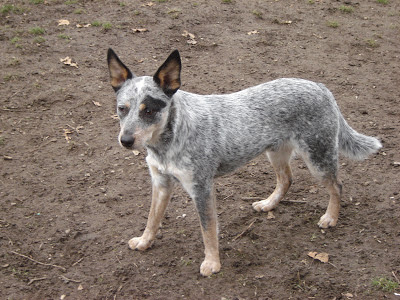 Forest learned to touch his blind pack mates with a toy or his paw to get them to play.  He discovered this after a few times of having Hiker and Brook walk away and ignore him. That was probably the hardest for me, watching him gather his courage to initiate play and then be ignored.

At home, Forest is always in the middle of whatever is going on and if there isn't anything going on, he'll start something! 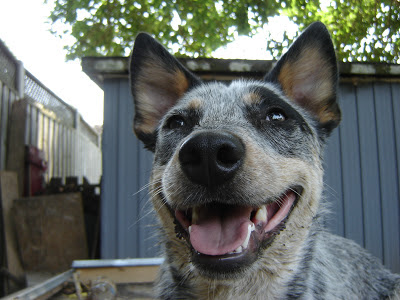