I had planned to tell you about how the pack assisted with the installation of new flooring in the master bedroom.  The room was cleared out, the tools assembled and we were ready to get started.

Best laid plans and all that.  You see, it looks like the floor is level.  It's a new sub floor (installed by the previous owners) and no, I didn't actually get a level out and check. I now know that I should have.

Let's just say that I am really glad I kept all the receipts and that I am not looking forward to carrying 17 boxes of laminate flooring back downstairs and out to the car to return it.

So, why is Breeze excited?   Well, part of the reason is that I made some new tug toys.  (Some scrap fabric knotted and braided) 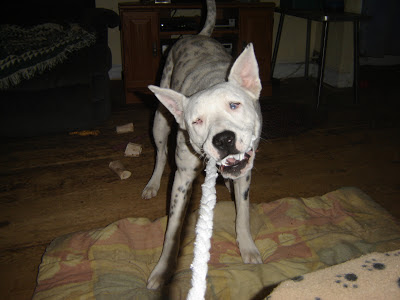 But the real reason why Breeze is so excited is this - 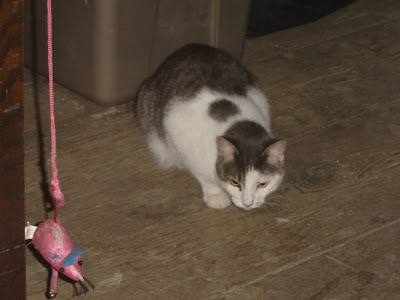 Not to be confused with Gerrard the wonder kitty. 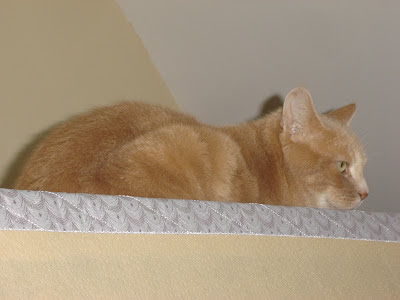 She is approximately nine months old,  spayed and fully vaccinated.  Her people posted an ad on Kijiji to find her a new home since their landlord found out about her and told them no pets allowed.

I think that her name will be Elsie (after my Grandmother).  She's settling in well after her first two nights of hiding in the back of the closet which is under the stairs. As you can imagine, the pack makes a fair amount of noise running up and down the stairs and no doubt the poor little thing was terrified. I decided to get her out of there and put her in a large dog crate with a bed, food and water and a litter box. She used the litter box right away and then meowed, ever so softly.  Elsie seems quite content now to be wandering around and sniffing at the dogs through the gate. After settling for the afternoon in the crate, it's no longer being used for her.

Breeze seems convinced that this is the best thing to ever come in the house.  She is beyond excited every time she gets a whiff of her!  They have checked each other out and Elsie seems curious as to what those hulking creatures are. Gerrard is his typical self with a whatever outlook on life. I think that being exposed to the permanent pack and fosters over the years has made him ultra-relaxed.

Brook was trying to figure out what was going on and being the clever little thing that she is, she got up on the armrest of the chair for a better vantage point. (yes, she is blind, so it's not like she was able to see better!) So, no new flooring installed but a kitty that needed a forever and ever home has arrived and that makes Breeze very excited.
Posted by acd6pack at 09:34