As you can imagine, with a pack of rescued and special needs dogs who currently range in age from ten months to seven years old, there are issues and sometimes challenges.

Our latest challenge involves Callie, who is around seven years old.

At our home, we have the same routine on work days/nights.  All the dogs except Hiker are crated and receive a Kong with some of their meal in it and canned food to hold it in tight. (yes, Hiker gets a Kong too, she just isn't crated)  The crates are always in the same place are never used as a disciplinary tool, they have nice bedding, toys and things to chew.

Since Callie doesn't always play nice with others, she has been crated when unsupervised since she was adopted five years ago.

For some reason, over the past couple of weeks, Callie has developed an issue with her crate. It's been bent to the point where the door barely closes and latches. 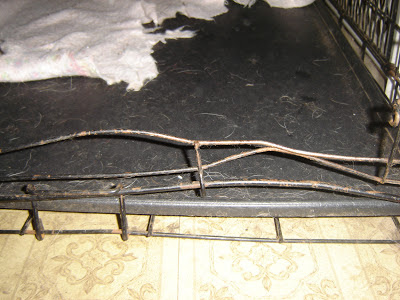 She has been destroying her bedding and when I approach to open the door, she is panting, trembling and anxious to get out.  She runs to the water dish and gulps water.

﻿
﻿
The first few times this happened I thought she maybe would be better with a dish of water in her crate.  That made no difference, it would still be there, untouched when I let her out.

Yesterday morning while I was in the shower, she got out of her crate, since I obviously didn't close the (mangled) door as well as I thought I had.  She was laying on the floor, on her bed in the room where her crate is.  (It's a small room off the kitchen where she hangs out and I've re-purposed the side of a baby crib to make a gate)

When it was time for me leave for work, I showed her the Kong and said in my happy (cheery-before-the-crack-of-dawn) voice, "In ya get Callie!"  She just looked at me as if to say, "No damn way am I going in there."   Uh-oh.  I can't be late for work and I am not going to try and force her.  So, I decided to leave her in the room with the baby crib side rail gate.  Since I am a bit paranoid, I shut Hiker in a bedroom with a radio on and some toys.


When I returned, Callie was calm, relaxed and seemed only mildly interested that I had returned. Quite a difference from before.

I've talked with a few fellow dog people who have and/or had older dogs and they all say that their dogs developed odd habits and some anxiety type issues as they aged.  I've never experienced an older dog since Cairo died at age seven and the only older foster we had was with us a few weeks before he was adopted.

I really don't think of Callie as being an older dog but I suppose that at around age seven, she's getting to where she'd be deemed an older dog.

When I was driving home earlier today after getting groceries it suddenly dawned on me.  Seperation anxiety.  Could that be what is happening?  The crate that Callie sleeps in at night in the bedroom is fine with her. She's not alone. Same thing if she is crated in the living room. She isn't alone.

So, that's what we're dealing with.  Not a huge problem (yet?) but somewhat puzzling.