The title of this post is not a reflection on the pack, I'm not saying they are a bunch of chicken hearts, not at all.  We have chicken hearts.  From chickens. (I am finding them a bit gross since it has been a few years now that I've been eating almost exclusively vegan, but that's not what this is about.)

A few weeks ago, the pack received some dehydrated liver from fellow Canadian blogger US On Cloud Nine.  I've been considering a dehydrator for a while now and those pieces of liver decided it.  I knew I had to get one or else the pack was going to be trying to obtain bus tickets to go and find more of the dehydrated liver.

So, off to the local department store and we became the proud owners of dehydrator.  Let the fun begin!  I started with some fruit and dehydrated apples and bananas.  Yum!  Then we moved on to some potatoes (got a good deal, 10 pounds for 99 cents) and then some sweet potatoes.


In the above picture, that's Brook at my feet, as usual. 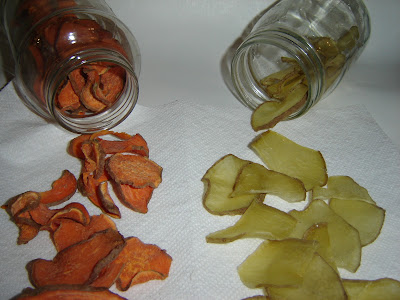 I had asked our veterinarian about the dehydrated liver and voiced my concerns about the fact that the liver was concentrated and whether or not it was "good" for the dogs to eat.

Me:  "I'm just a bit concerned, you know, because of what the liver's function
is in the body.  Then it becomes concentrated with the dehydrating. I
wonder if that is maybe not such a good thing for them to eat."

Dr. R: "Really?  That's your concern?  Didn't you just tell me that they eat
shit out in the yard?"

Well, you know, the vet has got a good point there.  But seriously, the vet did say that the small amount of liver they get as a treat is fine and that I worry to much.

So, off to the grocery store to look for some liver.  While I was there, I saw chicken hearts and they were cheaper than the liver, so, being the thrifty little thing that I am, I decided to try the hearts.

I sliced them in half and around 12 hours later, this is what we had. 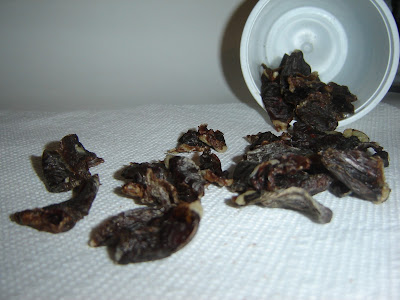 They are very crunchy and the whole pack loves them!  While they were dehydrating, there was a slight smell in the air and a few curious little noses leaning towards the counter top.