Tasty Tuesday - we got heart!

Since the dehydrated chicken hearts were such a success, I decided to (spend most of the grocery budget) purchase two beef hearts to dehydrate for the pack.  I had to visit a couple of stores before I found one that would order them for us.  Interesting thing about that - the butcher asked if it was for a dog. He said that there have been a few people asking for organ meat for their dogs. As the conversation went on, he mentioned that as a kid, his Mother would cook beef heart for dinner.  I sympathized, we were served that too!

The two hearts cost just under $35 but yielded a vast quantity of meat for dehydrating.  I decided to slice and freeze it so that I wouldn't be constantly dehydrating for days on end.  I was surprised that it didn't smell all that much.  As with the chicken hearts though, the kitchen was a popular place for the pack to hang out with their noses in the air!

No pictures of the hearts or slicing, not very nice to look at.  However, I did take a picture of the dried and finished product. 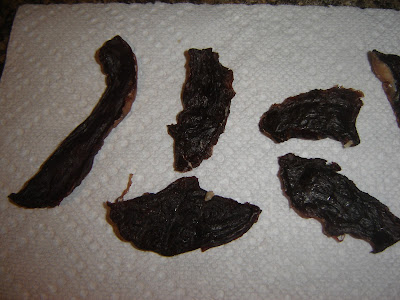 Some of the slices were a bit thick and resulted in more of a chewy, jerky type treat with others being more dried and crunchy.  I am storing the treats in a jar, in the fridge to keep them fresh, not that they will last long!

Here are various pack members and their thoughts on the dehydrated beef hearts.

Forest likes to sit on the (securely closed and latched) kibble storage tote for his treats. 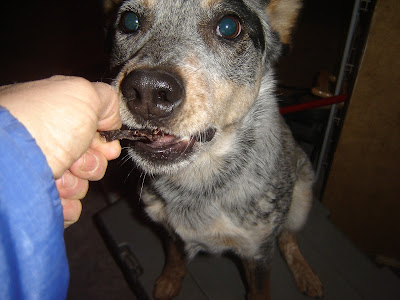 Callie was so excited, she almost stood on her head! 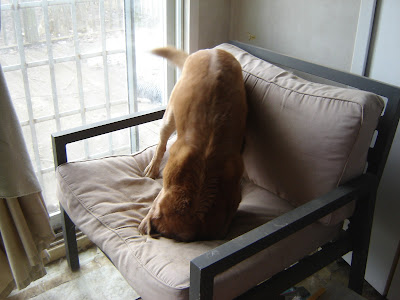 Azule, how good are these new treats?

So, if you have a dehydrator, we would highly recommend dehydrating beef hearts for treats, it is acd6pack approved!