There are a few daily things that people are curious about regarding the pack.  One situation that came up recently was how it wouldn't be possible to leave anything edible unattended.  Well, the other morning, I decided to prove that it is possible to do that in our home!

We don't have use a coffee table or end tables in our living room.  No coffee table mainly due to the fact that it would be another obstacle for the blind trio and partly due to wanting the open space for playing.  As for an end table, a dog crate works well.

Since we have switched back to the wire style for now, I've added a piece of cardboard so that the cat's paws don't go through and the piece on the side so Elsie won't fall off.  Yes, she might fall off because she is a belly rub fan who rolls around and doesn't pay attention to the edge!

I had set my breakfast down and then went to open the door for Brook to come in and saw Elsie, Forest and Breeze checking out my breakfast.  They know to not take anything so I had time to go and get the camera. 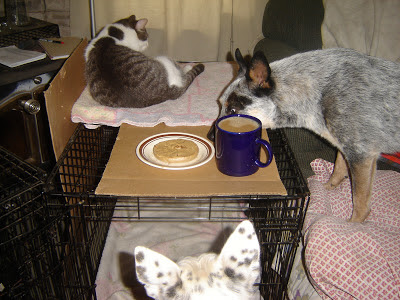 Forest actually got really close there but a quiet, "ahem" from me and he backed off.  Now, if that half a bagel with peanut butter was on the floor - it would last about two seconds!

(The pillow that Forest is standing on in the pictures usually leans against the crate so it is soft and comfy for Breeze as she lays on the ottoman and leans on the crate.)

Now don't be thinking that the poor, neglected and deprived dogs went without peanut butter - regardless of what they tell you.  Each and every morning, without fail, they all get a half of an unsalted soda cracker with natural, organic peanut butter.  Besides, the bagel had raisins in it.
Posted by acd6pack at 07:48