Foster pup and the pack.

Our foster pup Twiggy is still with us, a few weeks after the original estimated couple of weeks.  I am waiting to hear from the rescue about the date for her spay.  It's been delayed in part to my work schedule and the fact that the vet the rescue uses is an hour away.  Not to worry, she has settled in quite well with the pack and everyone has adjusted.

Initially, I was a little concerned about Breeze.  She seemed upset and out of sorts when Twiggy arrived.  I do find that Breeze is the most sensitive one of the pack and seems to really need some extra fussing and snuggles.  She has now relaxed and is having great fun playing with Twiggy, as they all are.  Even Hiker and Bill have been seen playing a little bit of chase.

Twiggy has quickly learned that when treats are being distributed, everyone must sit quietly and wait their turn.  No grabbing or pushing allowed. One morning last week Twiggy pushed her way to the front and grabbed a treat that I was giving to Bill.  She had to leave the kitchen and wait out on the enclosed porch until the others had their treats.  Interesting to see her reaction the next morning at treat time.  She sat quietly and waited and has done so every time since with no grabbing, just taking it nicely. Smart pup!
Here are the girls hanging out in the yard - 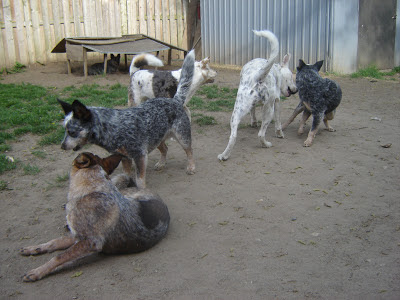 Some people say that a group of female dogs won't work, they won't get along. Nobody told these ones.

Meanwhile, on the other side of the house... 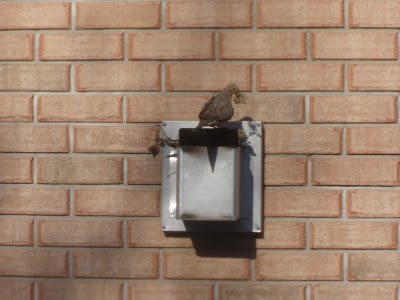 If you look closely, you can see that the male is actually standing on the female's back.  I did some reading on mourning doves and it is the male that beings nest materials to the female and he stands on her back as she makes the nest.  This picture was taken out our bathroom window and is our neighbor's house.  There was a robin's nest there a couple of years ago and it was fun to check on them through the window.  We won't be watching the doves nest and hatch little ones though.  The nest disappeared shortly after they started making it.
Posted by acd6pack at 05:26